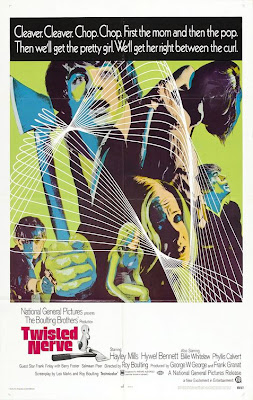 Imagine if you will a Roman Polanski psychosexual thriller whose main stars are more fit for a live-action Disney comedy. No need to exert too much energy imagining, because it exists in the form of Roy Boulting’s 1968 creepy British thriller, Twisted Nerve, featuring Parent Trap’s Hayley Mills (then 22 years old) and Zack Effron lookalike Hywell Bennett.

Bored rich kid Martin Dunley (Bennett), whose father has passed away, has a brother with down syndrome (referred to here as “mongolism”) and a mother who cedes parenting to his stiff father-in-law, becomes infatuated with college student Susan Harper (Mills) after they both get stopped when he shoplifts a toy. Not wanting to reveal his true name, Martin pretends to be his brother Georgie and puts on the guise of someone with a mental handicap. Susan takes pity on him and offers to square up the whole stealing incident. Martin becomes instantly fascinated and begins stalking her. Eventually, he cons his parents into believing he’s going to France and visits the Harper residents where he tells them his father has dropped him off to stay while he’s gone to Paris. Sympathetic to the supposed slow boy’s situation and impressed by his gracious manners and demeanor the Harper clan takes him in, giving Martin a more advantageous proximity to be near the object of his lust. Unfortunately for him, Martin has dug himself into a hole in his Georgie pretense, since there’s little chance he could ever be with Susan, and thus his sexual frustration manifests itself into something murderous.

The final act loses a lot of momentum as screenwriters Leo Marks and Boulting (story credit given to Roger Marshall) stop the film dead to offer one of the most ludicrous scientific scenario that pretty much amounts to the questionable logic that if you give birth to a child with down syndrome, it’s pretty likely that your next child, if of normal intelligence, will posses psychopathic tendencies. Besides the lame pat explanation for Martin’s actions, this scene brings the film temporarily to a grinding halt just as it should be bringing the whole story to a boiling point. Imagine if you will if Simon Oakland’s psychiatrist character in Psycho came right before the reveal of Mrs. Bates’ identity and lasted about 15 minutes. Now you get the idea.

But the film does end strongly after this unwelcome detour, and is still very much worth a visit for the very creepy performance by Bennett and to see Mills’ playing mature and sexy. It’s kind of a like a more straightforward thriller version of MIA on DVD favorite Deep End and is willing to go to some uncomfortable places.

You’re probably familiar with the theme music from Bernard Hermann, which begins innocently enough (like the character) with whistling before reaching more intense peaks, as it was appropriated by Quentin Tarantino in Kill Bill vol 1 (the scene where Ellie Driver is dressed as a nurse).

Now I tried to find this film for ages on DVD, and eventually did through the great hard to find DVD sellers Cinema de Bizarre. However, recently an Amazon search netted one result, a Region Zero disc selling for $5.99. I cannot speak to the quality of that disc, and to all appearances it is not an official release. Since when I say MIA on DVD, what I really mean is MIA on an officially released Region 1 DVD release (too long a title), I am still including it. I recommend the Cinema de Bizarre disc, quality wise, and if anyone wants to take a flyer on the disc selling on Amazon, please do and let me know the results.