The Movie Goes to the Movies: Hollywood Blvd. 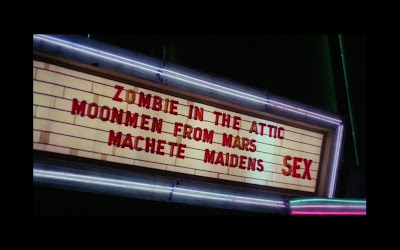 This month last year I posted this entry of The Movies Go to the Movies featuring a quick cutaway from Woody Allen's Annie Hall where House of Exorcism (the re-edited version of Mario Bava's Lisa and the Devil) is seen on a marquee. At the time I admitted I did not know which theatre it was. I do now. My problem was that I was looking for a indoor theatre, when the marquee was from a drive-in, The Gilmore Drive-In. 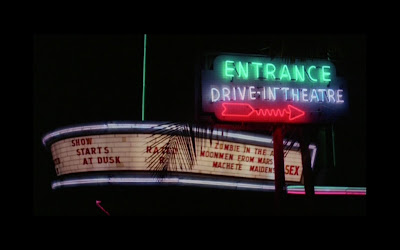 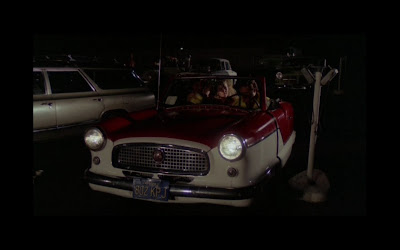 The Gilmore Drive-in opened in 1948 as Drive-ins were becoming de rigour amongst the introduction of television. Located near the Fairfax Farmer's Market, the Gilmore stood until the late 1970's when it's valuable mid-City land led to it being razed for development. It's now the Disney-ish shopping mecca, The Grove.

Here's a nice bonus, list making blogger Rupert Pupkin got Joe Dante to contribute a list of 10 underrated horror films, and Dante as good of a drive-in authority as you can find.
Posted by Colonel Mortimer at 8:00 PM

I never took in a movie at the Gilmore Drive-in, but remember going by it before its final demolition (I remember the nearby Pan Pacific Auditorium, too). Great post, Colonel.