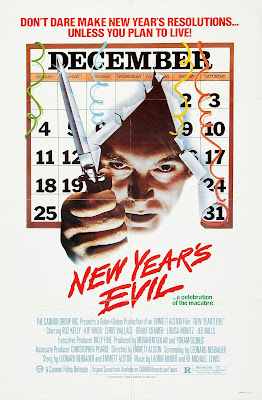 Ever the industrious duo, producers Yoram Globus and Menaham Golan and their company The Cannon Group was not content to just cash in on the holiday slasher movie genre, so they placed it within the confines of a punk rock setting (referred to as “New Wave” in the film, but actually more punk-mental in sound) for their 1980 release New Year’s Evil. The resulting film is a bit of an oddity, not really scary, but I had a lot of fun with it and found it quite funny, and intentionally so (I think).

It’s New Year’s Eve and Blaze, the emcee of Los Angeles’ premiere punk rock music show (the American Bandstand for the CBGB’s set) is hosting an all-night extravaganza that will feature live countdowns in every time zone. Early into the show, a caller threatens her using a voice distorter which makes him sound like a castrated Muppet (loved his pronunciation of the word killer which he draws out to “kiiiiiiiiiillllllllllllllllllllleeeeeeeeeeeeeeeerrrrrrrr”), with the promise that at the stroke of midnight in each time zone he will kill someone close to her crescendoing in her death at midnight Pacific standard time. A killer who respects time zones, I can appreciate that, even if when he says people “close to you” he actually means in a geographical sense, not like relatives. Man, homonyms can be a bitch!

New Year’s Evil then intercuts between the Punk Rock show and the killer as he performs his hourly murders. In a shocking development, the killer doesn’t wear a mask of any sort, he’s just some dude. Sure, occasionally he puts on an orderly outfit to get into a sanitarium or a moustache at a singles’ bar, but I saw that as a necessity of his goal, and besides, it’s handled in a more inventive Jim Rockford manner than anything of the likes of Michael Meyers.

The scenes following the killer are actually presented as black comedy. When her picks up an airhead blonde at a singles’ bar, he gets stuck with her roommate and has to listen to them babble on about EST and Zen practices. All the while trying he’s trying to figure out how to murder them by 12:00AM Central Standard Time. Imagine if Psycho and Quick Change had a baby, and you get the vibe of the film as our killer repeatedly struggles to fulfill his one kill per hour by such obstacles as being chased by bikers and getting locked out of a hotel. Looking at director Emmett Alston’s filmography, it becomes apparent that he viewed this as an opportunity to provide a comical slant to the proceedings; his prior work includes many independent comedies with genre roots. The punk group performing at the television show, Shadow, perform songs that comment on the plot, including the titular theme song and a ditty called “Dumb Blonde” which scores the scenes in the singles’ bar. Alston may lack visual panache or effective suspense filmmaking skills, but at least he has a calling card shot: dead eyed slow swaying dancers. They are at the show, the sanitarium and the singles’ bar. It’s his Leone eye close-up or Kubrickian tracking shot!

Okay, it’s SPOILER TIME, skip to the last paragraph if you don’t want the obvious identity of the killer revealed. So, yeah, it turns out its Blaze’s husband who was allegedly “resting in Palm Springs” (a euphemism I am going to use if I ever become a serial killer) that is committing the crime. And his motive: Blaze is becoming so successful; she’s ignoring him and her son, a wannabe actor. Pretty much every slasher film concerns men subjugating woman for eighty-five minutes with phallic instruments of destruction, until the woman strikes back in the final five minutes, but New Year’s Evil makes it the whole thematic point of the film. While I am all for powerful working women (and am married to one), she is kind of a jerk to her son for whom she’s basically so obsessed with her hosting duties she doesn’t have two minutes to listen to the news that he got an acting gig. Not saying she deserves to be killed, but a little more motherly instinct might result in your son not wearing your panty hose on his face or the twist where it's revealed he is probably going to finish his dad’s work. END SPOILER.

I read somewhere how the bigger the horror film fan you are, the less scared you actually are watching them. I guess that’s true to some extent. However, recently I’ve noticed myself being affected a lot more by them now that I am older and have a wife, generally though the more horror you see, the less impact they have. So the result is you end up becoming something akin to a jazz aficionado, where you know the tropes and the beats, and learn to appreciate the minor touches. Here it would be the comedic and thematic flourishes. No, New Year’s Evil will not have you hovering in fright in the corner of your house, but that doesn’t make it without worth. For one reason or another, New Year’s Evil has never been released on DVD, but it’s currently available for streaming on Netflix.

I just finished watching this one, I think I had in in my streaming list but seeing your write up made me want to see it so I could read your blog. I also liked the comedic elements to the film. I like that you saw from the murders perspective for most of the film as well, usually we just see people trying to find the killer or just see the killer we don't usually get to see a killer pick up an annoying lady and get stuck with her roommate (that was one of the smartest women in horror history!) to bad her nervous diarrhea did her in!

Anyway why nothing groundbreaking in this movie I liked its some what fresh take on the genre.

cool. glad you dug it.