The Movies Go to the Movies: A Nightmare on Elm St 4: The Dream Master

A Nightmare on Elm Street 4 is when Freddy Krueger stops being frightening and acts more like someone whose desire is not causing death to Springwood teenagers, but becoming Shecky Green's replacement in the Catskills ("How's this for a wet dream" after drowning a victim is a typical bon mot). The dreams take on a more uninteresting literal translation, losing the illogical nature that one associates with a dream state.

That's not to say it's completely worthless, there's some good special effects and a more ambitious scope than the other films. And importantly, we get a trip to the beautiful one screen South Pasadena theatre, the Rialto, where Reefer Madness is on the docket!

I wrote about the theatre in this piece. Sadly the Rialto still stands unoccupied. 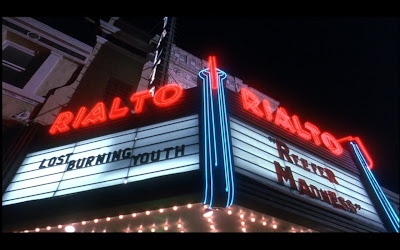 The Dream Master is full of comedic meta references, the first lines spoken by Krueger are "You shouldn't have buried me I was not dead" an homage to the then most recent film by Elm Street creator Wes Craven, The Serpent and the Rainbow, a magazine featuring first film breakout star Johnny Depp pops up in a shot, that type of thing. Here we have another reference as in addition to the poster for another big hit for New Line in 1988, John Waters' Hairspray, we also see the one sheet for Prison, the prior horror film from Elm Street 4 director Renny Harlin. 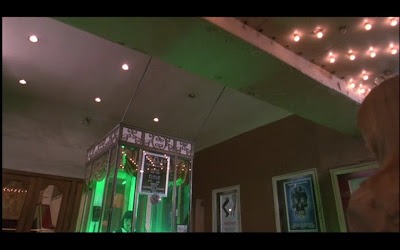 According to it's Cinema Treasures' page, the Rialto does have a balcony (it closed before I had a chance to visit it), so this may be the interior. If you've been to the Rialto, please let me know for sure. 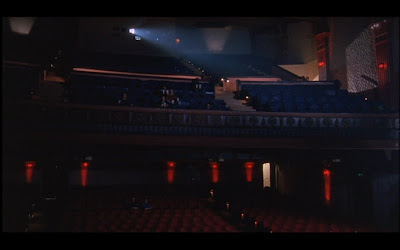 The Rialto is designated a historical landmark, but developers have their eye on it's valuable location. Hopefully it will survive and either live to show another film or at least become a live venue. If it were to be torn down for condos, that would truly be a nightmare! See, I'm trying my hand at the Krueger puns. 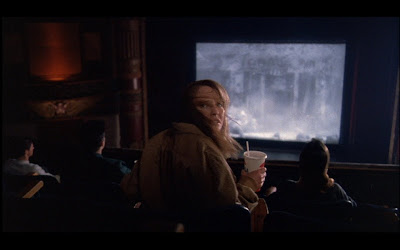 lol I like your zing at the end there. I liked learning about the inside jokes, maybe I will watch it again sometime in the next 10 years

Fine post, Colonel. Plus, I'm always for saving our local movie palaces (especially since I worked for one in the mid-70s). I've seen the Rialto Theatre, though I've never been inside it. Thanks for this.

Hey, since nobody has responded regarding the interior of the Rialto, I suppose I will! That is, indeed, the theater itself. I spent many, many hours of my misspent youth in that balcony in the 1970s (perhaps not so misspent after all!).