Trailer of the Moment: Suspiria 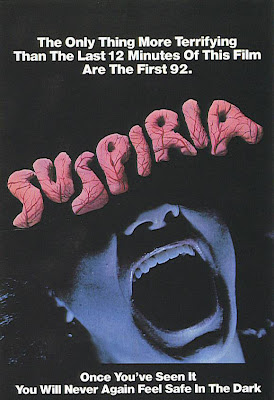 It's always interesting to see the routes trailers go when try to entice viewers to take a flyer on an unique new film. There are typically two methods, one is to surmise the style to give audiences the head's up that, yes, this is something entirely new and exciting. Pulp Fiction's trailer is a good example of this. The other way is to mislead potential viewers by offering the film as just another example of the type of cinema for which they are already comfortable with. This year's documentary feature Catfish is a great example as the trailer with it's emphasis on one scene to try and fool people that they are in for a Paranormal Activity like thrill ride is particularly idiotic.

Dario Argento had already made a splash in Europe by the time Suspiria, his most visually audacious, received it's United States release, where he was far from the name he would become amongst horror fanatics. So it's interesting to look back at how International Classics, a subsidiary of 20th Century Fox, promoted it's American release. It actually straddles both of the above mentioned strategies, mainly because it's nigh impossible to show any scenes of the film without revealing it's bold stylistic differences amongst it's exploitation horror films brethren. So to make it more palatable they throw in a silly skeleton rhyming woman. But I don't know, I kind of dig it, and the advertisers should be proud of their Don Draper genius level tag line: "The only thing more terrifying than the last 12 minutes of Suspiria, are the first 92!" I also actually prefer the pulsating, living film titles used in the American print over the Italian cut's classier font.

So let's close out the Argento appreciation half-week with the trailer to Suspiria, the only thing scarier than the last seventeen seconds are the first sixty!

I will admit I was a bit antsy to see what would be there when the lady turned around. Good trailer!