Trailer of the Moment (The Percy Rodrigues Files): Cat's Eye 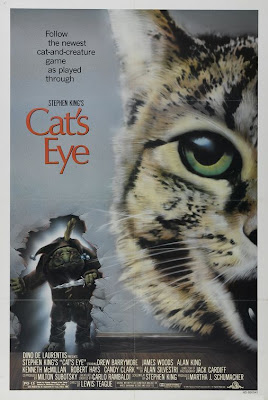 The week of April 12th, 1985, held three significant events for myself:

The first two require no explanation I imagine, so let me explain the importance of number three. It was the first "horror" film I was ever permitted to see theatrically, which probably was allowed due to the first two factors.

As I have described a few years ago on another blog, my first experience with a horror film came when I snuck out of my room late one night whilst my father watched Friday the 13th part III on Beta and caught a few minutes. Needless to say, I was instantly fascinated! As my father learned of my taste for horror, he started to tell me the plots of films whose video boxes tantalized me, but proved forbidden fruit because of my age (a discrimination that continues unabated to this day!), as ghost stories, these included Halloween and Psycho.

Flash forward to Spring 1985, my father or mother won tickets to a pre-release screening of Cat's Eye from a radio station contest [side note: this was a strangely prevalent occurrence in 1985, I got to see Back to the Future a few days before it opened wide, and my dad went to a pre-release screening of Porky's Revenge, which netted me a super cool extra large t-shirt with the film's logo on it, both via radio station call-in promotions], after an intense bargaining session where I promised my mother that my homework would be finished first, and I would have no nightmares, I was allowed to accompany my dad, thus becoming the first of many horror films I would see theatrically, a large portion with my dad.

To those who have seen it, obviously Cat's Eye is no great shakes in the annals of horror filmmaking. A triptych of short stories penned for the screen by King himself, two of the three stories would be more apropos of a Twilight Zone episode than say Tales From the Crypt. But the last vignette, featuring poor little Drew Barrymore being stalked by a nasty, wall dwelling, soul sucking goblin, actually was very effective to this nine year old child, and alas, I did have a nightmare that night (though I never told my parents) when I woke up and my poodle Sammy was breathing close to me, very similar to the tactics employed by Mr. Goblin.

To commemorate my twenty-five plus year appreciation of horror cinema, let's look at the trailer for Cat's Eye, which is heavy on King references (Cujo, Christine, The Shining and The Dead Zone all net a reference within the first thirty seconds) and lo and behold, who's that narrating, none other than our good pal, Percy Rodrigues.

If you can remember, I'd be interested in your first horror film theatrical experience, please share in the comments or if you have a blog, your own post.
Posted by Colonel Mortimer at 8:00 PM

Thats a story I never knew about! I am really glad that you shared it, it made me smile. I have yet to see Cat's Eye, but I do recall you saying it was pretty scary.

I can see why that is a memorable time (both good and bad), my friend. I remember CAT'S EYE well. Since I'd started reading Stephen King in the mid-70s, including his short stories collections, I looked forward to this film since it adapted two of his better ones. King himself did the screenplay and converted QUITTERS, INC. and THE LEDGE well. That last vignette, THE GENERAL, was written for the film, IIRC. I enjoyed it immensely.

As for that horror film experience, I take it that since you mentioned theatrical you're meaning the first in a movie theatre. If so, I'm pretty sure I got to see the Hammer film, Dracula: Prince of Darkness, in '66 when I was twelve. But, that wasn't my first horror experience--those we're in front of the TV with the old monster/horror programs on local channels of the day. I'd watch them on the weekends as a much younger kid. IIRC, the first was the 1934 Bela Lugosi & Boris Karloff classic, The Black Cat, when I was around 5 or 6 years old.

Thank you for sharing that memory and for this post, Colonel.

Well, Mummbles, I am not sure if it would still be scary today, but when I was nine years old definitely.

Leopard13, I grew up a big fan of King's work and remember reading Quitters, Inc (it was part of Skeleton Crew right? or Night Shift?)

I have to admit that as far as Hammer films go, I have yet to see any, it's the major blind spot in my viewing, but TCM is showing a bunch this month each Friday, and I've recorded a few, can't wait to finally get to rectifying this blind spot. And thanks a lot for sharing!

Yes, it was King's Night Shift that had both THE LEDGE and QUITTERS, INC. as part of its collection. Thanks, Colonel.