Poor Fred Dekker. In 1986 and 1987 he crafted two films that paid homage to his beloved horror genre while bringing a new unique sensibility and humor that was undeniably singular to the writer-director. Both films: Night of the Creeps and The Monster Squad were distributed through Columbia Pictures secondary studio Tri-Star Pictures, and both were box office disappointments upon theatrical release. However, they began gaining a steady cult thanks to video stores and numerous HBO airings. Able to parlay that into what at the time should have been a major coup, directing the third Robocop film, that too ended in frustration as Peter Weller did not return, the film which was originally going to be R rated like the other two Robocops changed gears to attempt to appeal to children who watched the Saturday morning cartoon incarnation, and most drastically, Orion, the company produces the film went bankrupt before Robocop 3 opened.

His directing career apparently cut off at the knees before it got far, Dekker suffered further indignities when the DVD market exploded in the early 2000s, and the copyright holders of his first two cult films showed no interest in providing a release on the then thriving format. This despite well attended repertory screenings of both Monster Squad and Night of the Creeps, most notably in Austin and Los Angeles, and bootleg transfers becoming more and more commonplace at conventions.

The Monster Squad finally made it to the digital market place via Lions Gate on July 24th, 2007, and just over two years later, on October 27th, 2009, Night of the Creeps was graced with a dual DVD and Blu-Ray edition from Sony. Both DVDs do right by the films: great transfers rife with hours of extras including commentary for both with Dekker himself. However, he was provided one last kick to the groin with the lackluster covers that graced these long awaited cult classics.

Here are the original Night of the Creeps posters 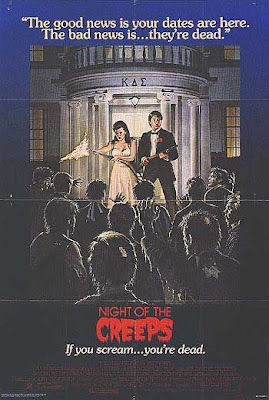 I like this one and would have been fine with it being replicated for the digital release, but it's my least favorite of the three original designs. This is also the only poster to feature both of the film's two tag lines. 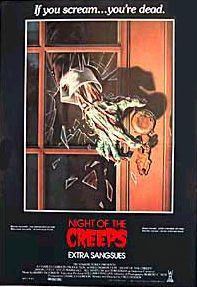 I prefer this simpler design because like the 50s-60s genre film that it pays tribute to, it doesn't really tell you too much about the film itself. 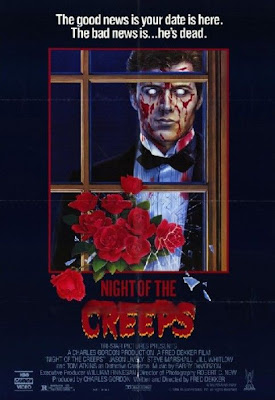 This is the art I most associate with Creeps as I discovered the film on VHS which featured this as the cover. I still prefer it. The tag line clues you into the film's sense of humor, while the central image is memorable and intriguing for first timers.

When it came to the digital release, not only did they screw up once, but twice, since the Blu-Ray and DVD each have separate covers (technically it's three times since there was a voting process for fans to choose their preferred design, the third is actually the worst, but you know, whichever wins, we lose and what have you). 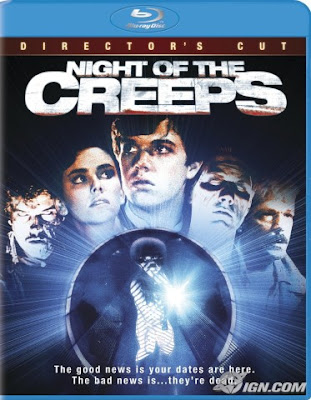 Besides suffering a bad case of the BIG HEAD cover syndrome of the late aughts, it also contains a pretty major spoiler on the left hand side, as well as an emphasis on the alien, who are only featured in the film's pre-credit prologue. 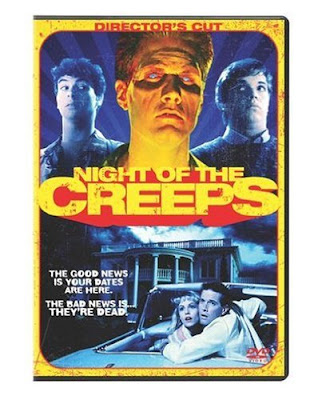 I guess this is the best of the three original options, the colors are a weird choice, but the film is a bit off kilter, so that's appropriate. However, my main issue is that it seems there was a debate whether to stick with the aforementioned big head route or to go for something more interesting, like the 50's couple in the bottom half, another reference to the opening prologue (did the cover designers just watch the first and last ten minutes of the film?), and decided instead of making a choice to go with both. Unfortunately, this is not a Reese's Peanut Butter cup situation, as the two tastes don't blend well and the owner of the DVD is stuck with a schizophrenic case. 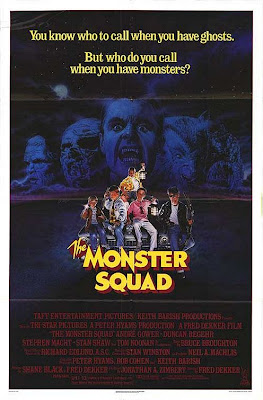 For a generation who grew up with this film, this poster is iconic. This was the VHS cover and I cannot count the number of people I've seen sporting the "squad" portion of this image on t-shirts. Sure the tag line is unnecessary, but perhaps just the squad ready for action in front of the car would've made for a fan pleasing cover.

Instead we get this DVD cover: 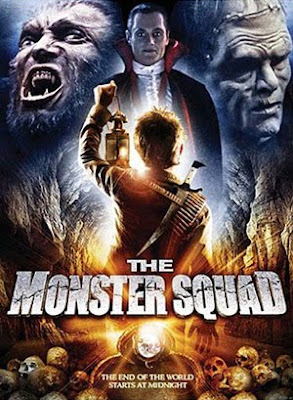 Again, not awful, but it seems to be an attempt to confuse consumers into thinking that this was one of Harry Potter's side adventures. And while the Dracula resembles Duncan Regehr in costume, neither the Wolfman or Frankenstein's monster look anything like their Stan Winston created film incarnation.

But if mangling the DVD and Blu-Ray cover is what it takes for Dekker to finally get his work out there, I guess in the long run, it's a minor annoyance for a greater good. And I would gladly endure an awful movie poster if it means Dekker gets an opportunity to direct again.
Posted by Colonel Mortimer at 8:00 PM

I confess that I've not seen these two, sadly. I'll need to rectify that. Thanks, Colonel.

I know, just leave a good thing alone, right? They're always changing shit to make it more marketable to a wider audience.

Did you see the DVD cover to the latest release of Near Dark? They actually made it look like a Twilight Movie. Near f'ng Dark!

leopard--I am not sure if you had to have been a certain age at the time of their release, but they are really good fun. It sounds like your son might be around the right age to appreciate The Monster Squad.

dumeep--aargh that fucking Near Dark cover is awful, I almost considered this being just a mid 80's horror Bad DVD cover post and including it, but I focused on Dekker

Thanks for the write up, I bought a bootleg copy of Monster Squad which had the classic poster as it's cover. I guess it is a sad state that the bootleggers get it right. The Creeps stuff is just god-awful. But hey, someone cool got you the blu-ray so you got that going for you!